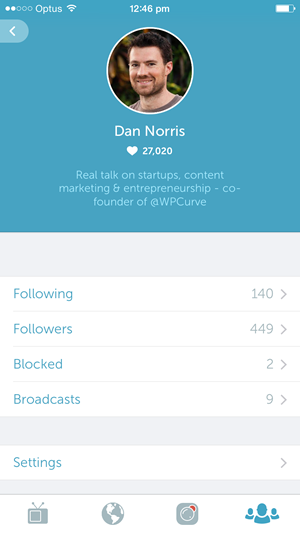 In case you haven’t noticed, I’m a little bit excited about Periscope. Think webinars but for busy people, via your phone and with loads more interaction – “one with many” instead of “one to many” I heard someone describe it as.

In this post, I’ve put together a few Periscope tips, specifically for participants.

I’ve been using it a lot the last 2 weeks, both as a participant and a broadcaster. To get involved grab the app on your mobile and follow me @thedannorris.

One of the most exciting things is the opportunity to connect with influencers. I did a scope on this and wrote it up 17 epic opportunities for getting the attention of influencers.

To do that, you need to become a useful Periscope call (Scope) participant. Here are some of the things I’ve picked up about being a more useful participant in the last 2 weeks.

Keep in mind that no one really knows how to use it yet, including me!

Normally I try to get on the calls early and specifically say hi. i.e ‘Hey [name] from the Gold Coast’. Presenters are looking for small talk at the start of their Scopes so you are helping by doing this. It will also get their attention, it’s hard for presenters to see people joining, but they always see the comments.

2. Say hello to other participants

This is a great way to build some credibility with the presenter. If you know other participants on the call, say hi. The presenter will then realize that you are part of the tribe and will also see your name when you reply. You can click someone’s comment and hit reply to reply in the comments. As a presenter I love it when conversations between participants happen on the call.

3. Include your name in your profile if you can

This is a tricky one because you probably want the same Periscope handle as your Twitter handle (which is the default). However as a presenter it’s hard to tell who people are because (a) the profile pics are faded and small, and (b) the comments disappear quickly. Presenters are looking to refer to people by their name but it’s hard for them to view your profile while focusing on doing the call. If your name is in your handle, they are more likely to say your name out and more likely to be confident addressing you.

I’ve seen this work both ways. I’ve had some people on my calls make comments about my appearance. Nothing super bad but what they probably don’t realize is doing a Periscope call is pretty daunting. You are looking at a giant full screen phone of your own face so the last thing you want is anything negative from a participant about your appearance. You probably don’t want to be too creepy and tell the presenter they are hot either. But some sort of balance is probably a good idea, depending on the relationship you have with them.

A positive comment about what they are wearing wouldn’t hurt, or a comment about the view, something nice to get their attention and make them feel less daunted is only going to be a good thing. Again be careful, because you don’t want to come off as creepy.

Presenters obviously love it when you share their broadcast. In the app click the little person icon down the bottom right and then hit the Share button. You can share the Broadcast with your Periscope followers or on Twitter. I have been less reluctant to share every broadcast with all of my Periscope followers, because all of the notifications could become annoying for people (I’ve already un-followed people who over-share).

Sharing on Twitter is less interruption for people, or sharing with specific followers who would be interested in the call is always a good idea.

Presenters are rushing through these calls and will often mention links to websites, other accounts, names of products etc. Remember they can’t type, so I’ve noticed some helpful participants support presenters on the calls by adding in the names of products or URL’s mentioned by the presenter. Presenters really like this and it will get their attention.

A lot of questions get missed on Periscope, because of the lack of real estate available on the phone screen. Don’t be afraid to answer questions from other participants if you can add value. Try not to be too annoying and answer all of the questions for the presenter.

8. Ask questions that are on topic

Barging into a live Periscope call half way through and asking an unrelated question is a good way to piss off a presenter. Hang in the conversation for a while and ask a related question. As a presenter, it feels really weird to do one of these calls so presenters are generally super keen to answer relevant questions that come in. Don’t repeat the question too many times but don’t be afraid to repeat it once or twice if it’s missed.

9. Give all of the hearts

Tapping your screen sends a love heart to the presenter. This is Periscope’s quality score so it helps the presenter in terms of their overall rankings on Periscope. It also makes them feel nice on the call. You have 500 hearts to give on a Periscope call so don’t be afraid to use them. Presenters love it! Your hearts are the same colour as your profile so often if you have engaged quite a bit, the presenter will know that it’s you sending them.

10. Reply with emoticons when you are mentioned

If you are mentioned on a call, the presenter probably knows who you are. But since the platform is so new, most of the participants probably don’t know who you are. When you are mentioned, if you reply in the comments, people will realize that you are the person the presenter is referring to. Even better, if you reply with emoticons, it will stand out more. People can then click your profile and follow you right there on the call. This is a really good way to get followers.

I wouldn’t be afraid to use your name in a comment or when you are introducing yourself. The handle on Periscope is quite small on the interface and it’s light grey. It’s not easy to read and it’s too hard for presenters to click only our name to see your profile and your name while they are doing the call. An easy solution is to use your name in the comment. They will be more likely to read out your comment if they can easily address you by name. ‘Hey Emma, Dan here from the Gold Coast’ etc.

Where to from here

I hope you check out Periscope. If you are interested in coming on my calls, please download the app and search for @thedannorris. I’ve put a Trello board together with some of the ideas I’m thinking about ‘Scoping’ about. Check them out here, and let me know in the comments which topics are of interest.

We also have a great Periscope thread going in my free Content Machine Facebook group, you can join that here.