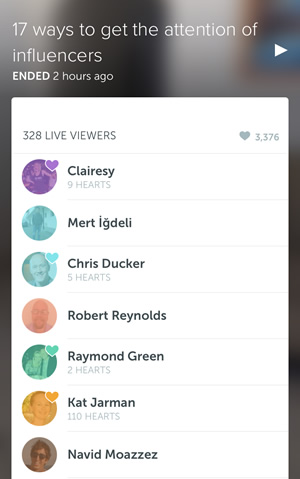 I have a confession to make. I think I’m addicted to Periscope!

It’s an amazing way to get useful content out quickly and build a whole new level of trust with your community.

But there’s also an insane opportunity for influencer outreach on periscope.

So much so that I just did a periscope about that very topic, 17 ways to get the attention of influencers (replay below) and I’ve written it up as a post as well.

In this post I’ll also share the approach I took to doing the periscope call (my 3rd one).

If you are on there please add me by searching for Dan Norris or handle @thedannorris).

I thought of this idea this week, when legendary startup investor Chris Sacca tweeted my blog post to his 1.6 million followers.

This dude @thedannorris did a pretty good job of summarizing some of my tips for startup investors: http://t.co/8ZzuWtAuWn

Getting the attention of Chris Sacca is no small feat. The dude is a billionaire. To put that into perspective, there are less than 30 billionaires in the whole of Australia.

So I thought a periscope call on how to get the attention of influencers was timely.

I spent 10 minutes throwing some ideas into Trello. 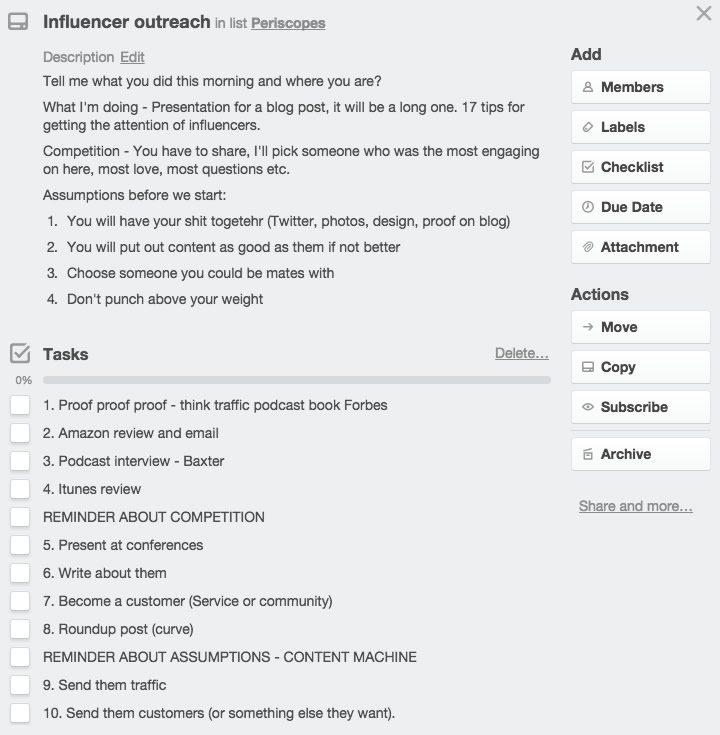 I set these up on my laptop on a stool in front of me so I could glance at them and refer to them on the call.

Periscope let’s you download the video to your mobile which is super cool. Their hosted version of the replay looks nicer but it only stays live for 24 hours. Here is the downloaded version which I uploaded to Youtube.

A few warnings, the one I tried prior to this crashed so my broadcast starts with “well that was shit”. Oh and then a bird flew into my window. The joys of live streaming! Click the thumbnail to check out the replay.

17 ways to get the attention of influencers

Here is a list of the 17 ways to get the attention of influencers. First, some bare essential pre-requisites.

17 ways to get the attention of influencers

In summary, get on Periscope it’s insanely addictive and fun. Search for Dan Norris (handle @thedannorris) and join me as I figure it out!

Mentioned on the Periscope