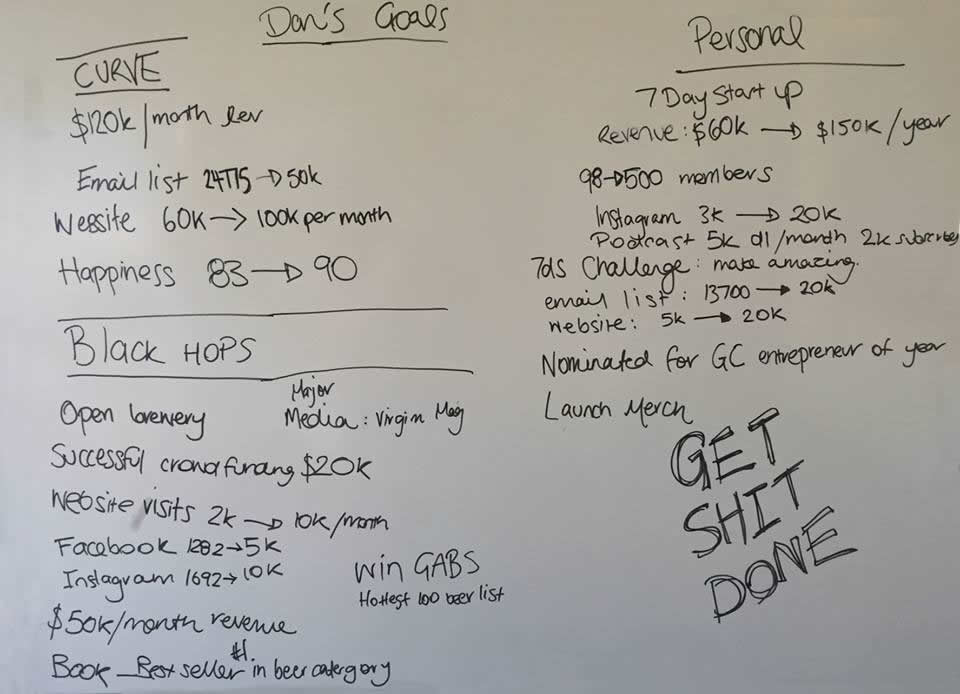 Every year I write a review of the year in business and set goals for the upcoming year. I’m not sure if anyone else reads the post, but it’s damn sure fun to write!!

It’s crazy when you look back at 12 months ago and think about how much stuff has changed, what’s become your new status quo and how your thinking has changed for the upcoming year. It’s also very beneficial for focus and motivation. I’ve recently started working with a career planning framework and monthly review process which I’ve shared with my 7 Day startup Pro group. More on that later, for now let’s look at 2015. Here’s a quick pic of how it looks and details below.

In January 2015, this is where I was at and my 5 business goals for the year.

Looking back at those goals, they seem crazy in every way. I failed most of them but still had my best year ever in business. Here’s what happened:

WP Curve got no where near $2m in Annual Run Rate (about 80% recurring). We came within 1 single signup of getting to $1m which was kinda cool / frustrating. We were at $650k annual run rate at the start of the year and finished the year at $999,384, so a great result but not even close to the goal. I’ll be releasing a post soon on WP Curve blog going through some lessons learned.

I ceased my involvement in the live chat software towards the end of the year. We weren’t able to get traction with the idea and my other projects were getting traction beyond what I’d imagined. I wasn’t really able to add much value despite trying my best. It was a shame and a very difficult decision to make. The project is still going on without my involvement and I’m still mates with Lukey no harm done. My dream of being a successful software entrepreneur is on hold, for now haha.

I wrote and released my second book, Content Machine in 2015. It got to #1 in the web marketing category and has been ordered over 10,000 times (a lot of those were free in the first 3 days).

I also launched a membership named after my first book, 7 Day Startup Pro and had 100 people join on an annual plan. Between 7 Day Startup Sales & Content Machine Sales (on Amazon), International translations and group signups I earned $60,122. This is nice for something with next to zero costs and something that didn’t exist a year and a half ago. I also saw the first pictures of 7 Day Startup in Vietnam in a book shop which was especially cool and sold my first international translation for Content Machine.

4. I spoke at a shitload of conferences

It’s so bizarre looking back at my goals from 12 months ago about being too nervous to speak at conferences and wanting to try a few and see how I go. In 2015 I spoke at too many events to remember. I spoke in The Philippines, Sydney, Melbourne, Brisbane, The Gold Coast from rooms ranging from 50 people to 400. It was stressful and memorable. I even got a bit bored doing it and one case presented without being nervous. I still get asked quite a bit to speak, for now I’m saying no to everything but we’ll see what happens.

Related: How I overcame my fear of public speaking and why that sucks a little bit

Related: My presentation at Superfast Business Live (first of the year)

5.  We came pretty damn close to opening a brewery

The goal to open a brewery was the biggest long shot of all. In the end we had some major milestones with Black Hops throughout the year. I’ll go into more detail in the 2015 highlights below, but in short, we came within a few months of opening our own brewery on the Gold Coast. We even got investors, a location, all of our equipment and we brewed the official Call of Duty Beer. Craziness. A failed goal never felt so good.

Jan – Started working at a Coworking space called Wotso. Made a few friend (lukey), installed a beer tap in our office and ended up on local TV talking startups (one of 3 TV appearances for the year!). March – I got the opportunity to speak at James Schramko’s event in Sydney. I’ve been looking up to James and following his stuff for so many years it was a real thrill. OMG I was shitting myself when I took this pic at the break before my session. March – Eddie and I were called up on at the last minute to speak to an audience about craft beer. We shat ourselves. Then we delivered. Like bosses. April – Black Hops started getting some mainstream attention. This photoshoot was for our Oyster Killpatrick Stout, our first beer entered into Australia’s biggest beer competition GABS which was a month or so off. May – I was fortunate enough to be asked by Chris Ducker to speak at his epic Tropical Think Tank event in Cebu, Philippines. Lived the dream, drank Aussie craft beer on tap!, met some great friends, and even….. was made Merry 😉 May – We made it to the beer festival (GABS). Just being there with our own beer was epic. We also ran into a few friends and did some competitor research and quality assurance work. GABS is strictly business (ATO please note). The coolest thing was our beer came 13th out of 120+ beers. We lost our shit. July – I made beer. Enough said. August – We took over the Pro Blogger Event on the Gold Coast 😉 October – Completed a whirlwind trip to China with Eddie and Govs, to inspect the tanks for the Black Hops brewery. Even ended up on Chinese TV. October – Headed off by myself to Bangkok for the annual Dynamite Circle event, and stumbled across a massive craft beer event! Flew back to the Gold Coast, had no sleep met the Black Hops boys at the airport for a beer and flew straight to Sydney for a full day of secret filming for the Call of Duty Beer. And yes, got on TV again. November – Took over the location for our brewery, and started filming our crowd funding video. November – Did a nude photo shoot (for charity). Govs bought the fake tan, obviously not enough for me. December – Spent Christmas day preparing the brewery for our tanks which arrived by surprise a bit early. The tanks arrived, and we somehow got them in place. Didn’t launch a brewery, but as you can see, we got pretty damn close.

My theme word for 2016 is “Momentum”. I’m going to aim to only work on things that already have momentum and not start any new projects. I can’t remember a year where I’ve ever been able to do that, so it will be a challenge! The 3 things are:

I brainstormed my goals with The MerryMaker Sisters recently. Here’s a pic and here are the goals. Keep in mind the only business I have 100% influence over is 7 Day Startup. The goals for WP Curve and Black Hops won’t be only up to me to make happen.

That’s about it. It’s been an epic year. 2016 will also be epic. I hope yours will be too. If you want to discuss this post or your 2016 goals, please do so via this thread in my free Facebook group. I will write another article soon about how I manage my goal setting process.